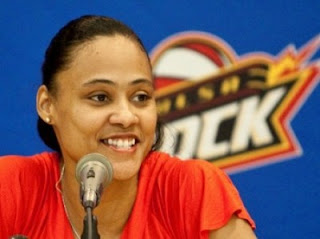 As if the WNBA were not already enough of a niche sport, the on-air TV tease before the start of the Phoenix Mercury-Tulsa Shock game on ESPN2 Tuesday night mostly featured Tulsa backup Marion Jones.

Yes, it's that Marion Jones -- the disgraced Olympic sprinter and former North Carolina point guard who's trying to resurrect her athletic career after claiming for years she did not take drugs and then, tearfully, admitting to steroid use.

She deserves the opportunity to produce a bounce-back, feel-good story but what's funny is that the WNBA and its TV partners keep pushing her presence but she hardly plays. Against Phoenix, Jones saw the floor for just over three-and-a-half minutes. She grabbed two rebounds, got steal, made a turnover and finished without a point.

In fairness, nobody expects her to return to basketball and be a star.

In reality, though, people do expect some perspective. Perspective from the TV partners who should know better than push a bench player. And perspective from Jones who should be more media savvy at this point not to talk about the WNBA providing a "wider audience" for her to share her message as she now touts the importance of playing clean and fair.

A wider audience? In the WNBA? Keep in mind, she was an Olympic champion.

The arena Tuesday night was barely a quarter full and more people watched her sprints during the Olympics than watched all of the game Tuesday night.

It's not a wider audience, and it's not responsible or wise to push sidelight stories. If she's the most newsworthy thing a WNBA has going for it, then that league is in deep trouble. Oh, right.
Posted by Steve Sampsell at 2:29 PM