After Venom, Mostly Pleasantries for Paterno 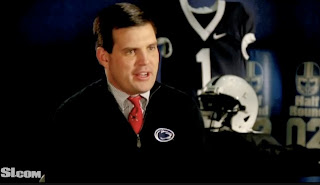 A week after SI.com readers started submitting questions -- many of which were mean-spirited (and that's a fair assessment) -- editors for the site selected nine they thought were worthy to ask Penn State assistant football coach Jay Paterno.

The resulting interview, taped earlier this week as part of SI.com's Just Askin' series, runs nearly 15 minutes based on those questions.

One questioner even asks Paterno why he thinks some fans are so tough on him. Another asks about his efforts outside coaching and his political work.

LINK TO INTERVIEW HERE
Posted by Steve Sampsell at 1:12 PM No comments:

Restaurants, TV Sports ... It's All the Same

Despite all they discussion and hype about who works in the TV broadcast booth on coverage of sporting events, it's the games that matter most.

A good group in the booth can make a game more enjoyable -- just as a bad group might make it little less entertaining -- but most fans do not decide to watch (or not to watch) based on the announcers. People tune in to watch their team, or a game that interests them.

For years, TV types have argued that John Madden "moved the needle" and brought viewers to games. Madden was many things -- entertaining, engaging, infuriating -- and he almost inevitably evoked a response and made a connection with viewers. But, he was always working a network's No. 1 NFL game of day.

Whether it was on CBS with Pat Summerall or later on "Monday Night Football," which aired on ABC and then NBC, Madden almost inevitably got an A-list assignment. So people were going to watch no matter what. It's hard to believe they were there just for him, even in minimal numbers. Had Madden worked week after week on irrelevant or low-profile games, he would not have become so beloved or well known.

In some ways, the TV business mirrors dining out that way. People eat out for the food. A good server can make the experience better -- just as a bad server can make the night seem a little less enjoyable -- but it's the food that matters. Even if you get that bad server, you're still apt to return if the entree was good. (You'll just hope you're not seated at that server's table the next time.)

Among televised sports entities, the NFL remains the featured menu item -- because people always watch. This year's average ratings have hit record levels, and might only increase as the season progresses and games become more meaningful.

Ratings the past week or so again bore out the NFL's dominance, even with a weak "Monday Night Football" matchup. That bland Jacksonville Jaguars-Tennessee Titans matchup still attracted 9.7 million viewers, compared to 8.2 million viewers for a more meaningful American League Championship Series game between the New York Yankees and Texas Rangers.

College football has been strong the fall too, with its prime-time ratings and viewership on ABC also finishing higher than post-season baseball -- and that would be the case no matter who was working the games. Proven and highly visible Brent Musburger usually gets those prime-time assignments, but if he were not there (we can dream) people would watch anyway.

Still, that does not mean on-air sports talent does not have an important role. Especially as TV programming becomes more fragmented and more niche shows develop, loyalties could be heightened for some on-air talent. After all, every professional league (as well as the Big Ten Conference) has its own network and every marquis mixed martial arts event has its own buildup in a TV series.

With things like that, people already appreciate and expect familiarity with those describing the action or hosting the shows. So they could play a slight role in whether people watch or not. In the end, though, what they plan to watch matters most. It's always about what's on the menu.
Posted by Steve Sampsell at 2:21 PM No comments:

What's the best broadcast call of a sporting event ever?

Credit Sports Illustrated writer Joe Posnanski for providing his opinion and ranking what he considers the top 32. Plus, thanks to the user-friendly combination of the Internet and YouTube, Posnanski's piece includes clips from the calls he cites.

Still, it's a good idea that was executed well. It's worth the time, to read, listen and watch.
Posted by Steve Sampsell at 2:19 PM No comments: 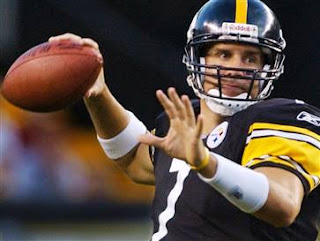 Who conducts the better interview, the team's former coach or a former running back?

We'll find out when they both get their shot during interviews that air Sunday. That's Bill Cowher and Merril Hoge interviewing returning Steelers quarterback Ben Roethlisberger for "The NFL Today" and "Sunday NFL Countdown," respectively.

According to the CBS publicity machine, Cowher "goes one-on-one with hard hitting questions" on "The NFL Today." At the same time, ESPN promotes Hoge as someone who has become a close confident of the quarterback who was suspended four games for off-field behavior and is returning to action this week at home against Cleveland.

He's contrite. He's knows he has to prove himself by his actions off the field. He's sorry.

Heck, should he offer anything other than that, well, that would be newsworthy.

According to CBS, Roethlisberger will discuss how he has changed during the suspension; what he has learned; and how he can help the 3-1 Steelers get all the way to Super Bowl XLV. And, of course, we'll get those hard-hitting questions from Cowher.

We'll see, though. While Cowher clearly has chops as a hard-nosed coach, the interviewing skills seemed unlikely -- especially since the CBS preview for the interaction between coach and former player comes only with an answer and not one of the questions.

Roethlisberger said this about the possibility of the Steelers trading him as they did wide receiver Santonio Holmes: "Well, when the talk started happening, and you did hear those rumors and stuff, and wherever they came from, I don't know, but it hit close to home and I realized I don't want to go anywhere. I love it here."

Love might be a strong word, but if either of the interviews is likable, and watchable, that'll be great.
Posted by Steve Sampsell at 7:28 PM No comments:

One of the latest examples of the pervasiveness and power of "College GameDay" was reported Friday by the Valley News Dispatch in western Pennsylvania.

Reporter Bill Beckner Jr. chronicled a day-long event in Leechburg, Pa., where students planned to launch their own High School Game Day. It's not a broadcast event, but it is something organizers hope can build energy just like when the ESPN types hit a college campus.

With no classes in the school district because of an in-service day for teachers, students plan a full day of activity leading up to the game between Northgate and Leechburg. Best of all, the student hosts are competing (they plan to shoot rock-paper-scissors) for the right to portray Lee Corso.

Click HERE to the complete article.
Posted by Steve Sampsell at 9:58 AM No comments:

It's a blog that has not launched (but will soon), some digital content (that should emerge in the spring) and an outlet that might find an audience.

The all-sports giant refers to espnW as its "new women's brand" and a retreat this past weekend in Southern California marked its first building-block moment with a panel discussion featuring big-name women's athletes and former athletes.

ESPN officials also invited members of the online sports community -- bloggers -- to the event. It was a wise move, because for what will be a niche brand will need the buzz and support of the existing community to survive. Some of that emerged through some thoughtful analysis. But, the retreat also prompted some other strong responses and differing expectations.

Still, it's really not ESPN's commitment or the response of advertisers that will impact the development of the brand most. Oh, those are necessary things, but it's a safe bet that ESPN can find a way to make things work financially, at least at the start.

Expectations and response will determine the brand's success beyond the initial period. In just the two blog posts linked above, the expectations and tone of the response to the brand clearly differ. Sometimes in a smaller, start-up brand/channel/endeavor, an unwillingness to compromise by those the product is supposed to serve can be the biggest problem of all.

ESPN might have a great brand in mind, an idea whose time has come, but that does not mean launching and maintaining it will be easy.
Posted by Steve Sampsell at 2:29 PM No comments: