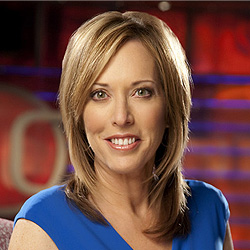 She’s always made her mark by being a sports expert and journalist (even a fan) more than a calendar girl, but Linda Cohn should merit appointment viewing -- mark your calendars -- on Feb. 21.

At 8 a.m. that Sunday, Cohn will host her 5,000th “SportsCenter.” She has hosted more episodes of ESPN’s flagship news program than any other anchor, male or female. In the buildup to the show, ESPN has created a Twitter hashtag (#LCo5KSC).

Cohn, who does her job well and consistently serves viewers, deserves the attention she’ll get in the next week or so. She has proven her versatility through the years on everything from studio shows to live events and radio broadcasts.

Amidst the growing mass of egotistical or ill-informed TV types, it’s good to know trustable talents like Cohn remain.
Posted by Steve Sampsell at 1:08 PM 1 comment:

Expect more Peyton Manning on TV -- as an analyst 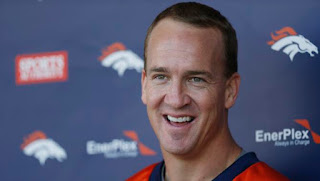 When Peyton Manning announces his retirement, and he will, he will not be away from the NFL for long.

Instead of measuring success by on-field accomplishments (18 seasons, 200 victories, 539 touchdowns and 71,940 passing yards), his expertise, insights and interview skills will become the new standards.

Almost as certainly as Groundhog Day means a convergence of attention on Punxsutawney, Pennsylvania, Manning seems set for a career in sports television. He’s already proven himself in two separate “Saturday Night Live” appearances and a variety of funny, self-aware and self-deprecating commercials.

Manning’s aw-shucks approach should translate well to TV and we might get a little more depth from him as he shares his opinions. Also, if network producers find the right forum for his legendary film preparation viewers might get treated to some interesting Xs and Os.

Expect Manning to be the most-sought-after free agent of the offseason. Again, that’s not as a potential backup quarterback. Every network with an NFL contract would want him on their team. My sense is that might be more as a studio analyst than a game analyst, but perhaps with the right pairing he might succeed working games. He's be good on games, it just seems that he'd have a bigger forum in studio.

Of the five networks that carry the NFL, only one really seems on the outside when it comes to bidding for Manning’s services. That he could be envisioned at any of the other networks is what makes him so valuable.

Least likely would be the NFL Network. It’s just not a big enough platform for Manning and he already brings more gravitas and less silliness to the position than several of the former players among that network’s too big continent of experts.

Now, alphabetically, scenarios for the other networks:

CBS: Viewers might miss former players Tony Gonzalez or Bart Scott if Manning took one of their spots, but both are relatively new to the set. Swapping a QB for a QB, Manning for Boomer Esiason, might make sense to some, but Esiason seems to be CBS’s token studio naysayer, so he might be secure as a result. After all, viewers need someone to wear the black hat. On games, it's doubtful the network would break up its top team of Jim Nantz and Phil Simms, but if they pair Manning with, say, Ian Eagle, that No. 2 team would get even stronger. (And it might already be the network's best tandem.)

ESPN: The network usually has everything, including a big on-air roster. However, with Keyshawn Johnson gone from “Sunday NFL Countdown” (his contract expired), there might be a seat for Manning with folks like aging Mike Ditka, former receiver Cris Carter and former linebackers Tom Jackson and Ray Lewis. In some ways, that seems like an easy and smart fit for all involved. At the same time, ESPN’s monetary problems could prevent a big investment in a big-time free agent. In terms of game coverage, he could be an interesting third on "Monday Night Football."

Fox: With a packed, proven and fairly A-list studio, that might be the tightest fit for Manning of any network studio team. Now, if they'd ax comedian Rob Riggle (or any comedian) to make room for Manning, that'd be great. Maybe Fox could lean less on the busy Michael Strahan (who works "Live with Kelly and Michael" as well as "Good Morning America") to make room, but that seems unlikely for the popular studio contributor. On games, he could again merit an assignment near the top of the roster.

NBC: With Tony Dungy and Rodney Harrison in studio, and Hines Ward on site with Bob Costas, the network has a lineup that works. Former Steelers running back Jerome Bettis did not fit in his role, but maybe Manning could, especially with former coach Dungy. His first post-Super Bowl interview was with NBC’s “Today Show” and he later appeared on "The Tonight Show with Jimmy Fallon," but that’s probably reading too much into his plans.

It’ll be interesting to see how it plays out and where Manning ends up on our TVs. Whatever the case, it seems likely we'll see him on TV, working games as opposed to playing them.
Posted by Steve Sampsell at 12:23 PM No comments: