Close-to-home death challenges ESPN as it honors Saunders, but does not offer a cause 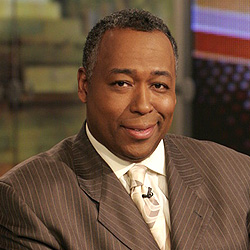 It’s been 11 days since ESPN’s John Saunders died and while the praise for his career and testimonials about him as a colleague and person have been appropriate, compelling, emotional and honest, there’s still something missing about the story… any form of journalism.

Not to be morbid, but viewers who invested hundreds of hours of their lives, probably more, watching Saunders great work through the years still do not know how he died.

Sure, we’re not his family, and his family can certainly choose to share what they wish, but TV and radio provide a special forum, one that helps build a bond, between those who work in the industry and those of us who consume their work.

In Saunders’ case we got quality every time, no matter the assignment. He was solid, in studio or on play by play, whether it was college football or some other sport. He seemed unflappable, and that’s how his colleagues have portrayed him in the past week or so.

In that way, we as viewers feel validated -- that the person we saw was the person he was. Maybe it’s just me, but it would be nice to know what really happened. It would not make us feel less of him, but it might help us better understand the circumstances of a family member or someone else we know. Maybe we could better support a cause or an individual as a result.

What’s frustrating is that had any other 61-year-old sports personality of Saunders’ stature died ESPN would have at least provided some context and indication about the person’s death. In this case, though, everyone at ESPN seems to close to the story to step back and report.

Kudos to Saunders’ colleagues on the Sunday morning roundtable, “The Sports Reporters,” for at least acknowledging Saunders’ ill health and battle with diabetes during on-air testimonials last week. Other reports have hinted at depression and long-standing injuries.

Viewers, folks who pay a cable bill or want to trust ESPN for its journalism, might not deserve all the specifics but they do at least deserve some reporting related to the story. It’s too bad that has not happened.

Cliché corner
It seems like the start of football season inevitably means an onslaught of more sports clichés and unchecked silliness than almost any other time of the year.

Two examples came to mind again this past week, and each prompted either a question or a need for more information, which is why such clichés fail and frustrate audiences (whether they’re listening, reading or watching).

First, a TV report stated that a football player “gained 10 pounds of muscle in the offseason.” No media member ever reports if someone gains 10 pounds of fat. Maybe the media might note that someone gained weight or looks overweight but if you start a sentence with “gained 10 pounds …” and ask a long-time sports consumer to finish the sentence, they know the cliché as well and will invariably state “… of fat.” It’s just lazy work.

Second, over use of jargon is often the result of a reporter trying to show their expertise while consistently not serving the audience.

It was prominent in Penn State football stories recently about the linebackers, who play the “mike,” “sam” and “will” positions. Sure, there are savvy football fans who know that means middle, strong and weak side, respectively. And they might even know how a team defines its strong and weak side alignments.

Here’s the thing, though, journalists and media should serve an audience by making things easy to understand or even educating them. Just tossing out the mike, sam or will does none of that. Providing context would be helpful, and is honestly necessary.

“BTN Tailgate” will debut Sept. 24 from the Wisconsin-Michigan State game in East Lansing, Michigan, that morning. The show airs live, beginning at 10:30 a.m., hosted by BTN’s Dave Revsine with analysts Gerry DiNardo and Anthony Adams, the former Penn State standout who played for the Chicago Bears.

Network officials expect the show, like “GameDay,” to rotate among campus sites during the season.

If Penn State can start strong, its home games with Minnesota (Oct. 8), Ohio State (Oct. 22) and Iowa (Nov. 5) all could be worthy of consideration for a “Tailgate” visit.

Tuner tidbits
n  The Steelers’ third preseason game, a trip to New Orleans to play the Saints, airs at 8 p.m. Thursday on WTAJ-TV (Channel 10).
n  This week means a full slate of action at the Little League World Series. While the money that drives the event, both for ESPN and Little League itself, seems obscene, and the happy-happy, joy-joy stories for the week probably are more true than false, its fairly easy for me to get over those critiques because the approach and intimacy of the broadcasts do produce generally good TV. Plus, my affinity for the event probably dulls my cynicism a bit.
n  Man, UFC’s Conor McGregor knows how to shape himself as a media spectacle and try to sell tickets for his pay-per-view events. His match Saturday night with Nate Diaz at UFC 202 ended after press time, but there’s no doubt McGregor is a champ in terms of promotion -- and UFC, despite a supposedly strained relationship with him, has milked that skill for all the media attention it can. That’s a big part of what can drive what it’s all about it boxing and UFC. But, while boxing has not been able to build or support such breakout personalities, several UFC types play well in the media.
n  In recent months ESPN has devoted more and more airtime and online attention to pro wrestling. Weekly segments with WWE “superstars” and more stories online about events and news, including tonight’s “SummerSlam,” represent a hopeful approach for ESPN, as it hopes to attract a few more TV and web viewers. It’s hard to argue that attention for the troupe’s scripted events represent any form of journalistic progress for ESPN. At the same time, because ESPN has lost multiple millions of subscribers (it’s base had dropped from nearly 100 million to just under 90 million in the past couple of years because many have moved away from cable), it’s probably happy to secure any form of consistent audience it can find.
Posted by Steve Sampsell at 5:31 PM No comments: