As the NFL lockout enters its second month, the release of the league's preseason schedule Tuesday provided some semblance of business-as-usual (albeit delayed a few weeks from the typical timing) as well as a glimpse at some of the teams league officials expect to be good during the coming season -- if and when the season kicks off.

At best, the schedule provides a look at storylines and teams the NFL hopes to put in prominent positions.

At worst, it's defined schedule of programming network partners must replace if the labor deal drags on and forces the cancellation of games.

Only the Bears get featured twice, so the lineup provides exposure for more than half the teams in the league. And, if the games do happen, ratings for this preseason might be slightly higher than previous years simply because fans/viewers might be glad to tune in after months of labor and legal discussions dominated NFL news.
Posted by Steve Sampsell at 8:56 AM No comments: 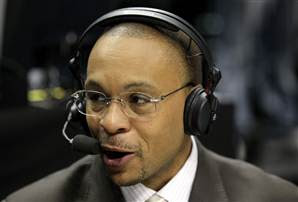 Just hours before the tip of the men's college basketball championship game, with Jim Nantz set to call the action as usual for CBS Sports, the man some consider Nantz's heir apparent (or even a sooner-than-that successor for the lead play-by-play position) admitted working the Final Four was his dream job.

Gus Johnson, annually the subject of what seems to be Gus Johnson Appreciation Month during the NCAA Tournament, told the "Scott Van Pelt Show" on ESPN Radio that he would love the gig.

When asked about his dream job on the radio show, Johnson did not hesitate.

"It would be the Final Four, national championship game," he said. "That's what I think I'm built for. That would be it for me."

Some fellow media members and an unrelenting cadre of supporters online regularly champion Johnson's emotional approach to calling games during the NCAA Tournament -- and he does bring an added life to those seemingly always tight games. He sounds like a fan, albeit a talented and well-informed fan, when describing game action. People like that.

In some ways, he's a perfect fit for the tournament.

In other ways, he's a perfect fit for the portion of the tournament he works -- because Nantz does the big event quite well.

He's more subdued, and at his worst he can be preachy, but he does bring the championship an air of dignity and importance. Maybe that's just another whitewash job that CBS and the NCAA appreciate, a falsehood perpetuated on fans, but Nantz does his job well.

Unless Turner Sports wants to make a change when it begins broadcasting the Final Four in alternating years as part of the 2016 tournament, it seems unlikely Nantz will lose his seat -- nor should he -- any time soon.

March appropriately remains Gus Johnson Appreciation Month, so people can experience and enjoy a bit more emotion than usual on a game broadcast. However, picking the right times to tone that down should be a required skill as well -- and that might be one criticism of Johnson's work.

So, we move from Johnson's month to an annual fortnight with Nantz as the lead voice of major sporting events in the United States. That includes the Final Four and extends this weekend through the Masters ("A tradition unlike any other," as Nantz and the CBS will repeatedly remind us). And that's not a bad thing.
Posted by Steve Sampsell at 3:34 PM No comments: 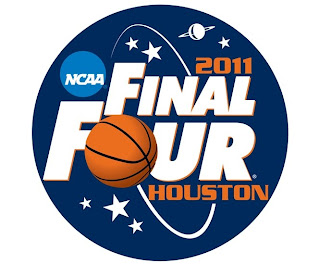 So much for simple or subtle.

If it's a big game -- a sporting event that has become a cultural touchstone -- it apparently requires a more-is-better approach in terms of broadcast talent, too.

While CBS Sports has garnered some attention as it expands from a two-man broadcast team (Jim Nantz, Clark Kellogg) to three (adding Steve Kerr), it has no exclusivity to the approach this weekend at the Final Four.

Westwood One, the radio home for the NCAA Tournament on 450 stations across the United States, has twice that many talkers.

On the TV side, CBS Sports hopes the addition of Kerr brings a bit more discussion and interaction to the booth. Ironically, while everyone associated with the move insists it's a no-egos, win-win addition, they also hope for some disagreement between Kellogg and Kerr during the broadcast.

And honestly, more might be better on radio, too. As long as those involved keep in mind that it's the game that matters most, some varied perspectives can help and make a broadcast better.

Still, just like the larger venues the NCAA values as hosts for the Final Four (because of more ticket revenue), there is a point at which more can become a bit much. If the broadcasts have not reached that point, listeners and viewers can certainly hear and see it from here.
Posted by Steve Sampsell at 4:28 PM No comments: