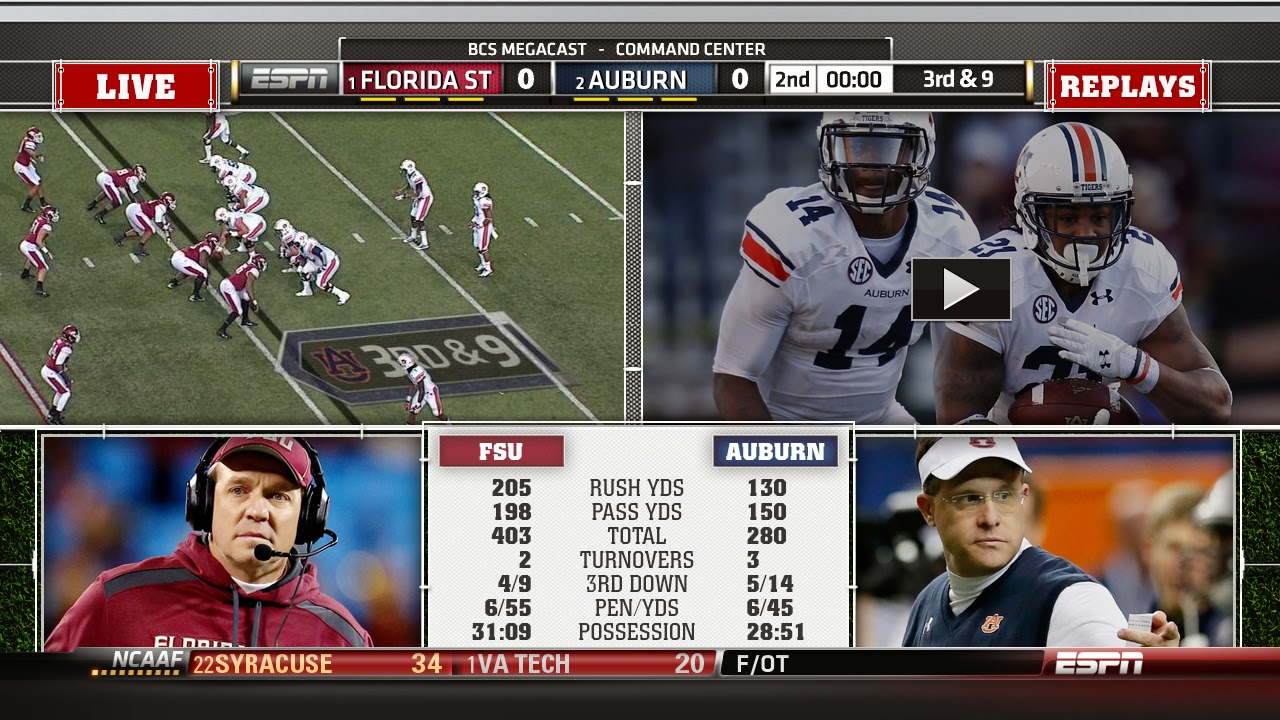 Change sometimes comes slowly to sports, with strong programs and teams remaining successful for several years -- and that’s the case for TV sports, too.

A look at the best TV sports individuals and teams from the past year looks strikingly similar to the list from last year, but there have been changes. There have also been efforts that will reshape the way viewers get sports for years to come.

Best Studio Show: "College GameDay" (ESPN)
At some point, this show might not be the best of its ilk on TV but that’s simply not the case now. With a strong mix of talent (in front of the camera and behind), “GameDay” entertains, informs and thrives. Plus, it does so from a different location every week. So much gets squeezed into the show each week, and it rarely feels overwhelming. Best of all, camaraderie and preparation seem to define the work of those on the program. There are no contrived or forced humor segments. That’s a credit to those who produce the show and a sign of respect for fans and viewers. (Those NFL studio shows that utilize such schlock could learn a lesson from that approach.) Simply put, “GameDay” makes game days special and it’s invariably worth watching.

Best Studio Host: Chris Fowler (ESPN)
He’s the biggest reason “GameDay works. Fowler directs traffic and brings an important and obvious level of preparation that provides a foundation for the show. So many people handle similar roles, and do so well across sports and networks, but Fowler sets the standard.

Best Play-by-Play Team: Mike Breen/Mark Jackson/Jeff Van Gundy (ESPN)
Again, camaraderie comes to mind with this group. While Breen rarely misses a beat during the game, it’s apparent he Jackson and Van Gundy apparent get along. They can critique and offer information while proving their connection to the league and with each other. Because of that, they connect with viewers.

Best Play-by-Play Man: Mike Emrick (NBC Sports)
Few broadcasters make an event worth watching. It’s usually the event itself that provides the reason people watch. In Emrick’s case, though, that feels different. Clearly viewers are not tuning into NHL games for Emrick in a manner that reshapes ratings, but they should. He’s smart, smooth and worth hearing and watching.

Best Color Commentator: Jay Bilas (ESPN)
He’s somewhat of a multi-tool talent, strong covering games as a color commentator and just as strong in a studio role. Additionally, he’s opinionated and not afraid to share that opinion and challenge those in power, especially the NCAA.

Best Sideline Reporter: Doris Burke (ESPN)
It’s the toughest job in TV sports and few do it as well as the multi-talented Burke. She rarely traffics in silliness or softballs and has earned the respect of those she covers as well as viewers.

Best Insider/Expert: Tim Tebow (ESPN)
He’s part color commentator, part expert and pretty much a complete success story in terms of his broadcasting career. Tebow, the former Heisman Trophy winner, went from a brief, over-hyped and under-appreciated NFL career to an expected role at ESPN. Many wondered how the nicest guy in the sports would could survive as an analyst, but he conveyed his expertise well. He shone through during Bowl Championship Series coverage early in the year and than landed a key role with the fledgling SEC Network. He also got an opportunity with “Good Morning America.” It’s been a quick climb, thanks to his name and the relationship he has with viewers and so far he’s done quite well.

Newcomer(s) of the Year: Tara Lipinski and Johnny Weir (NBC Sports)
Maybe they should not get the nod because figure skating gets so little attention compared to other major televised sports, but they’re certainly something different. Their work during the Winter Olympics quickly established them as breakout stars -- and not just because they were different. They were able to convey their on-ice experience as competitors and they made competition more entertaining.

TV Feature of the Year: "Lauren Hill: One More Game" (ESPN)
Once again, Tom Rinaldi found a wonderful story and told it wonderfully. A cancer-stricken women’s college basketball player hoping to play just one game before she dies sounds like a made-for-TV movie, but it was certainly real life and the story was certainly delivered well by Rinaldi, producer Ben Webber and editor Josh Drake. Through their work, the story of 19-year-old Lauren Hill of Mt. St. Joseph became even more compelling. The family provided important access and Rinaldi and Co. clearly appreciated what they got and respected the family while telling a tough story.

TV Moment/Story of the Year: “BCS Megacast” and “Teamcast”
With its coverage of the last BCS championship game, ESPN provided one template, and with their coverage of the Final Four, CBS Sports, TBS and TNT provided a similarly successful example of the same approach. Apparently, more is better -- especially for big events. Those events showed multiple channels focusing in different ways on the same event could resonate with advertisers and viewers, drawing attention and ratings while helping connect people to the contests. Such an approach is clearly the future of sports on TV, and that's a good thing.
Posted by Steve Sampsell at 1:08 PM No comments: 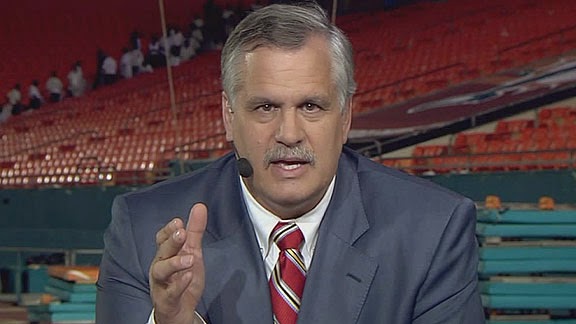 Nine days before the Pinstripe Bowl, the game’s color commentator was deep into preparation for the assignment.

He’d worked games featuring both Boston College and Penn State during the regular season, was familiar with both coaching staffs and had even requested the assignment (long before the matchup was set, more on that later), but his preparation was important.

So, Matt Millen arrived at the Lasch Football Building at Penn State at 10:27 a.m. Dec. 18. He was wearing a black Under Armour ballcap and an unzipped black ESPN College Football jacket over an untucked blue flannel shirt and gray T-shirt. In dark blue jeans and sneakers, he was comfortable and ready to work.

After renewing acquaintances with Penn State video coordinator Jevin Stone, Millen was set up in the wide receivers’ meeting room and ready to get started.

A nearly hour-long meeting with coach James Franklin happened first, though, as they talked about the bowl game, the season and more.

Still, by noon Millen was seated, remote control in hand and ready to watch game films from Penn State and Boston College. He was reviewing both teams on the same day as part of a meticulous process that invariably follows the same pattern.

Millen will serve as the color commentator for the Pinstripe Bowl on ESPN with play-by-play man Bob Wischusen and sideline reporter Quint Kessenich.

At one time, years ago, Millen was generally recognized as the second-best TV analyst in the business behind Madden. After his stint as general manager of the Detroit Lions and over time, he has proven himself among the upper echelon of college analysts, even as the prominence of assignments has slipped a bit in recent years.

Still, he’s honest and opinionated -- something Penn State fans got a taste of when Wischusen, Millen and Kessenich worked the Penn State-Illinois game near the end of the regular season.

Millen brings the same forthright approach to watching film that he practices on gameday. He usually watches film with his partners as well as the game’s producer and director, a process that produces banter and interaction that eventually helps inform and shape a broadcast. On, Dec. 18, though, he was stuck with me.

Having worked the Illinois game (“One of the worst Penn State games in years,” he said.), Millen watched Penn State against UCF, Ohio State and Michigan State -- getting a taste of the team from the beginning, middle and end of the season.

He said he focuses on a team’s schemes as well as who coaches are trying to “hide” and they trust. By reviewing every play of each game a couple times, he learns a lot. “Coaches tell you anything,” Millen said. “The tape doesn’t lie.”

In Penn State’s case, that includes bunch sets for receivers, something Millen said a team can because its receivers generally do not separate well from defenders when running routes.

Mostly, the film revealed the obvious for Penn State, with an almost porous and unpredictable offensive line at the center of the team’s problems. Millen said a team can hide one weak offensive lineman, often at right guard, but a team with more liabilities than that will struggle to find consistency.

Also, Millen focused on schemes, wondering aloud whether coaches were adapting to the personnel available or simply focusing on their scheme. Like many, Millen sees the Pinstripe Bowl as an important part of Penn State’s development.

“They have problems, but I expect to see some changes and progress,” Millen said. “They should be better with a chance to get healthy, get more coaching and practice a little more.”

Still, he knows some things will not change and fully expects the Boston College to bring repeated blitzes to test Penn State’s offensive line and quarterback Christian Hackenberg.

On “Hack,” as Millen invariably refers to him, the former NFL GM sees untapped potential and a few problems for the quarterback. “He’s made some mistakes, maybe more this year than the year before, and that’s on him,” Millen said. “But, he still has a great arm and potential. He’ll get a chance in the NFL. Put him behind a decent line, and he can be good.”

He was in the building until 7:30 p.m., when “my wife made me leave” and before a late dinner with good friend and teammate Dr. Paul Suhey in State College.

At times, Millen pointed out “soft” or “undisciplined” players who lazily tried to block or complete and assignment. In what amounted to his most critical comments, he would flatly state, “my daughter could do better than that.”

And mentions of his family define Millen as much as anything.

He asked ESPN officials to work the Pinstripe Bowl so he could spend the holidays with his family, getting as much time with all of them and especially his West Point-educated son Marcus, who will be deployed to the Middle East on Dec. 27.

“I wanted to do the game long before Penn State was in it,” Millen said. “It’s nice that they’re playing, but it was really more about having time to see my family.”
Posted by Steve Sampsell at 1:43 PM No comments: