At some point (and we're past that point), you have to wonder how the folks at ESPN, the University of Texas and even throughout the Big 12 Conference failed to overlook the obvious regarding the soon-to-be-launched Longhorn Network.

A competitive advantage for UT? Certainly.

How could it be overlooked? Impossible to believe.

In fairness, ESPN and UT were blinded by the money and the potential windfall from a network that airs only Longhorn sports and university-related programming. It's another brand and another revenue stream.

For other Big 12 Conference members, the possibilities were clearly never considered. After all, the channel came about when the conference was about do dissolve and UT was flexing its muscle to keep things alive after the departure of Nebraska for the Big Ten Conference.

Texas is the bell cow for the Big 12, and the other members that were suckling it to remain alive and together were no doubt happy to have a reason for the Longhorns to remain. So they hardly questioned the network when it was proposed.

In theory -- and eventually in reality -- it's not a bad idea.

We've seen the success of a conference channel (with the Big Ten Network) so it only made sense that some big, powerful school would attempt to anchor its own channel. Few schools have the following to make such a channel possible, but Texas is in that limited group and BYU believes it can do the same.

However, compared to the Big Ten Network, which does a good job of balancing hours of programming dedicated to specific schools and sports, the Longhorn Network would be all UT all the time. That's not the major problem in some aspects, though, because the Longhorns' opponents in games that air on the network would get exposure as well. Even if games would only be a small portion of the programming, it could be argued that all parties could benefit from the network's existence.

Beyond that, UT would get huge benefits in terms of exposure with coaches shows and other programs. That's something other schools could not match.

In addition, the Longhorn Network had planned to air high school football games, something that would clearly benefit UT in terms of perception and recruiting. That's the network's biggest problem, and it's good the games have been put on hold.

The potential has even prompted the NCAA to order a confab with those involved in all existing and potential conference and team channels. That "summit" will take place Aug. 22 in Indianapolis, and it's a necessary meeting.

Although the NCAA often reacts to changes without providing guidance and leadership, this reaction makes sense. Hopefully some direction and leadership will emerge from the meeting.

It's clear that Texas and its people are not prepared to bring leadership and perspective to the situation. After all, UT football coach Mack Brown has vocally dismissed the network as creating any possible recruiting advantage for his program, and to make that argument he has to either be clueless or immensely ill-informed.
Posted by Steve Sampsell at 9:48 PM No comments:

Are You Ready for Some Football?

One of the most certain signs of an NFL lockout settlement came late last week, when Hank Williams Jr. filmed this season's promos for "Monday Night Football" during a long session in Florida.

For the 62-year-old country music superstar (and make no mistake, he's so well known in part because of the success of those "MNF" promos), the annual sessions provide a reason to be excited. Especially because what was supposed to be a one-year deal in 1989 has earned an anticipated spot in U.S. sports culture.

A generation of fans know "MNF" only with Hank Jr. kicking off the action, and his role in the weekly telecasts has lasted longer than almost any other talent associated with the show.

The season's game-opening segments were taped during a long day at on campus at Full Sail University, an award-winning school for entertainment media, and included dozens of faculty and students from the school as well as a couple hundred extras.

And, while NBC has tried its own musical opening with Faith Hill, it's OK but just not the same. The Peacock Network should have stuck with its original female singer -- Pink. Because if you're going to be different -- different, entertaining and strong are good.

ACT: Hope Solo tells Dana Jacobson the U.S. women's soccer team did not choke. Video
REACT: Some people, including ESPN analyst Tommy Smyth, disagree because they believe the U.S. team could've done a better job protecting the lead. Twice. Still, it's good to have a bit of analysis and a sports-talk feel in the aftermath of the Women's World Cup. Otherwise, it's not a sporting event. It's just some cultural experience. Still, the dynamic of the questioning by Jacobson, and Solo's response, was polite and subdued compared to other such situations with other sports. If you listen/watch closely, though, you see that Solo takes the typical jock, people-do-not-understand-the-sport defense as at least part of her response.

ACT: HBO's Ross Greeenburg decides not to renew contract and leaves the company.
REACT: A potentially impactful loss for sports on TV. Hopefully HBO has enough of a culture established to withstand his departure, but he's been that good and that much of a driving force. Boxing on HBO never waned (despite the sport's problems) under his leadership. Plus, he created "Real Sports with Bryant Gumbel" and the "Hard Knocks" series. During his tenure, HBO earned 51 Sports Emmy Awards.

ACT: Shaq joins TNT as a basketball analyst.
REACT: A wise decision by the Big Analyst. They'll find a better role for him and he'll make the same amount of money and work less (over many fewer platforms) than he would have at ESPN. Plus, he'll still get all kinds of media attention.

ACT: Poynter Project reviews Bruce Feldman, ESPN situation. Link
REACT: So, he was not suspended, just asked not to do some work for a while. Sure, that's believable. It was just a poorly handled situation all the way around. Honestly, communications companies may communicate more poorly than any kind of business. In the end, it's not ESPN but Feldman who takes the bigger hit, and that's a shame because he's good and deserves to be in a better situation.

ACT: K-Swiss unveils long-form, online commercial. Video
REACT: It's supposed to be irreverent and naughty, something that could garner buzz and gain traction online. It's a nice premise, but it's just OK -- a little much to much. It's too long. Plus, dropping all the f-bombs happens just because they can and becomes self-serving.
Posted by Steve Sampsell at 1:47 PM No comments: 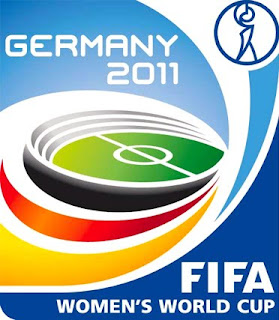 As reliable as the once-every-four-years schedule and publicity blitz that puts the Women's World Cup front and center for sports fans, some people invariably attempt to make the games and the outcome about more than the games themselves.

It's not just compelling action and exceptional athletes, it's something more, some window into a bigger cultural or sports issue. And that's a shame, because it detracts from what's happening on the field. (OK, the pitch in this case.)

It's NOT about Title IX, and it's NOT about the acceptance or growth of women's sports internationally. Sure, those things happen as a result of the tournament, but that's not what it's about.

Making the ancillary or aftermath things the story actually detracts from the effort and performance of those playing the games.

People in the United States rally around the Women's World Cup -- Sunday's game (2 p.m., ESPN) could draw one of the largest TV ratings ever for a women's soccer game and interest has prompted ESPN to boost its production bells and whistles for the championship game -- because:
1) it requires minimal investment, you only need to pay attention for one week every four years;
2) because of nationalistic pride, a lot of people like to wrap themselves in the flag, or any red, white and blue apparel;
3) because we're winning, and people love to jump bandwagons and put their pointer finger in the air; and
4) because they've been programmed to care by a consistent media onslaught led by ESPN and supported by outlets of almost all types across the country.

That's all a good thing. Shared sports experiences are special, and this particular team seems determined, gritty, successful and talented -- all good things.

That does not mean women's professinal soccer has a future in the United Sates, because it has proven it probably does not. Nor does it mean more consistent coverage of women's college soccer in the future, because that's not the case either.

Still, the Women's World Cup is fun. It's good sports action, and it's really good TV -- thanks in large part to Ian Darke.

Yes, I'm sure its empowering and reaffirming for some, too. That's just not THE story. This is not 1973 with Billy Jean King in some made-for-TV tennis mismatch against circus barker/over-the-hill loudmouth Bobby Riggs.

No, this is 2011, with a women's soccer team worth watching because they're that good and nothing more. Let's just enjoy it for that and nothing more.
Posted by Steve Sampsell at 9:19 AM No comments:

It's Midsummer Classic time again, and that means a baseball game that's not what it once was supported by another over-hyped exhibition that remains back, back, back in the dark ages.

Sure, the Home Run Derby (8 p.m. Monday, ESPN) has changed -- with "team captains" picking the participants and some promised alterations this year. Those things are overdue, though, and it would be nice if they could work because the made-for-TV event has become too long and lost much of its cache in recent years.

Plus, there are only so many times before Chris Berman can offer "back, back, back" and it not be tiresome. (We will have reached that point before the first pitch this year.)

The made-for-TV derby should be good, but it has seemed to lumber along in recent years. Sponsor State Farm has provided some emotional and fun tie-ins at times. Those types of things -- with contest winners getting some big prize depending on the outcome of the contest -- have helped and made the event special at times.

Still, the derby needs help. Hopefully it'll come this year. If not, it'll just be more of the same -- the kind of TV event that baseball is lucky to have happen during the summer because it would be pummeled in the ratings were it to fall during the full-fledged TV season.

A mid-summer schedule has not really helped ratings for the derby (down 22 percent last year from the year before) or even the All-Star Game, though.

The game itself has been on a downward ratings trend for years -- hampered by the interleague schedule, players who skip the game, multiple pitching changes and the remaining vestiges of that silly tie years ago.

Sure, they're playing for something (home field advantage in the World Series for the winning league), but the All-Star Game (8 p.m. Tuesday, Fox) still seems a far cry from its heydey. Of course, that heydey came during the time of limited TV selections and, as an older fan, my memories are ties to seemingly wonderful incarnations of the exhibition in the 1970s and early 1980s.

In fairness, the game remains -- in many ways -- the best of any professional all-star contest. It's much better than what the NBA and NFL offer in terms of competition for their all-star games. Still, it just seems like it needs rescued from itself. It no longer seems special. Instead, it's just OK.
Posted by Steve Sampsell at 12:34 PM No comments:

While Ray Lewis delivers the hits in this great video from Funny or Die, he's not alone. A mix of strong writing and some wonderful cameos makes it fun -- and funny.
Field of Dreams 2: NFL Lockout with Taylor Lautner from Taylor Lautner
Posted by Steve Sampsell at 12:13 PM No comments: