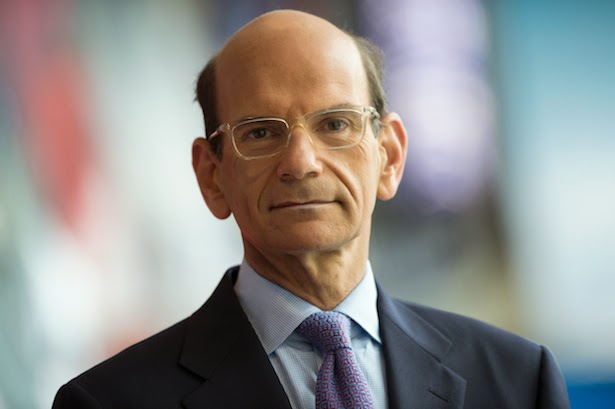 The game itself aired on ESPN, with Brent Musburger brought back from exile on the SEC Network to handle play-by-play duties. He had long been the lead voice of college football but was shoved toward the door and the football-crazed SEC this season to make room for Chris Fowler in the lead to TV spot and to ostensibly give the start-up SEC Network a bit more gravitas.

Musburger did that, albeit in relative obscurity -- especially in areas far away from the South, such as central Pennsylvania.

Still, he was not the story last night.

What really mattered happened on the SEC Network as a simulcast, of sorts, followed along with the Alabama-Auburn matchup. Because of the intense interest in the game, and because it could, ESPN used its SEC Network platform and put radio and TV host Paul Finebaum front and center.

While the game played on ESPN, “Finebaum Film Room: Iron Bowl Live” aired on the SEC Network. It was a live call-in show happening as the game played out. With Finebaum’s legendary listenership and reputation in the SEC -- and especially so in Alabama as the Crimson Tide-Tigers rivalry pretty much drives his show 365 days a year -- the move was logical. It should pay off in decent ratings, too.

More importantly, though, it was a glimpse at what fans could expect (and many apparently want) these days with the proliferation of sports networks and a shrinking inventory of major sporting events.

Fans first saw such an approach with the national championship game last season, when supporting ESPN channels focused on different aspects of the game, producing a popular option to watch college coaches as they watched the game and analyzed the action.

Viewers got more of the same from CBS and Turner Sports during the Final Four as national semifinal games were broadcast live three different places on TV. Along with the overall broadcast, there were team-specific feeds for each game.

For the broadcasters it makes sense because they utilize the same inventory (in this case Alabama-Auburn) and existing resources (Finebaum, his studio and production team) to produce additional “content.” Following along the “content” path with the live show, what happens during the game and call-in show -- emotional callers, heated exchanges or even, possibly, interesting insights -- becomes fair game to get repurposed online or some other format.

It might seem like overkill to some, but it’s an easy route to attention and revenue for the broadcasters -- and that’s what it’s all about.
Posted by Steve Sampsell at 8:33 AM No comments: