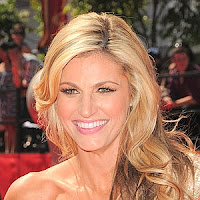 It's hard to imagine anyone has ever used "credible" as the first word to describe Erin Andrews -- and that's not going to happen here either -- but her debut as host of the Fox Sports college football studio show in 56 days does brings some credibility to the network's college football efforts.

Even before that first show begins, she has more big-time college football experience than almost any other on-air personality in the network stable. She comes with an ESPN pedigree and she should know what makes a strong pre-game show after contributing to one of the best of that genre for the past several years.

It might not be an easy transition to the host of such a show, though.

She proved how ready -- or mostly not -- she was for such an assignment on ESPNU when "College GameDay" expanded and she was supposed to host the first hour. Even during that less-watched first hour, she was OK, at best, and ESPN brass eventually altered the segments and style of the show to take Andrews off center stage.

At Fox Sports, she'll certainly be center stage. And, as networks jockey to position themselves to bid for TV rights to the upcoming Division I playoff system, Andrews could be in a position to become an even more prominent face in college football.

Her challenge remains moving past style and engaging viewers with substance.

She has improved as a sideline reporter, getting more information and asking better questions. At the same time, her biggest career boost was not an interaction with a coach or even her much publicized problems with a stalker. It was a stint on "Dancing with the Stars" that propelled her to a higher Q rating and seemingly more important assignments, such as hosting that first hour of "GameDay."

Unfortunately, she was not stellar in that role, missing the necessary gravitas to carry the show or serve as an adept traffic cop for others. That has to be of some concern for the folks at Fox Sports. If she did not dazzle on Saturday mornings, someone has to be asking how she'll do in prime time with even more exposure and pressure.

Then again, exposure might be the wrong word to ever use with Andrews. She's seems like a connected and knowledgable college football voice, but she's also a TV star, an attractive woman some critics and fans will never see her as more than a pretty face. In fact, Los Angeles Daily news columnist Tom Hoffarth this week offered some of the harshest criticism ever of Andrews.

He might be unfair at spots, but he's not entirely wrong. While critics and fans consistently send inconsistent messages about TV personalities, they often agree that they appreciate people who engage viewers and share information. Andrews can be engaging and informative at times.

To succeed as the face of a network team, though, she might most importantly need to seem more mature, and that's such a tough balance on TV for a woman -- and probably especially so while covering a youthful endeavor such as college football.

Viewers want vibrant and young, but Andrews is 34, so we're probably past the point where bubbly/laughter works. It's still sports and still fun and games, but successful studio hosts usually set an entertaining and strong tone for their broadcasts. Sure, things can be fun, but they're also seriously focused on what's about to follow or what's happening in college football overall.

We'll see Andrews on Fox Sports as soon as this week's All-Star Game (in a more familiar sideline reporting role from the American League dugout), but we'll have to wait until Sept. 1 to find out how she'll do as a host. We'll also find out if network officials really put her in a position to succeed or if they have something else in mind by reworking the typical pre-game show approach.
Posted by Steve Sampsell at 12:28 PM