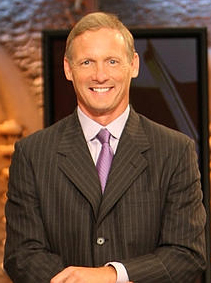 Thank you, NBC Sports and the NFL Network. Thank you for giving Mike Mayock so much work -- because it does it so well.

Too often color commentators working major college football or the NFL make no impression. Or, they try to hard and make the wrong impression. Too many of them live on either clichés or the sports version of "Fifty Shades of Gray," sharing so many words but, ultimately, so little information because they're not prepared enough to capably critique what happens on the field.

With Mayock, it's just the opposite. He picks his spots well, makes points that matter and makes them in a timely manner. He's arguably the best color commentator working on TV because he always does his homework and comes to work ready to share information.

If he worked only college games (focusing on Notre Dame for NBC) or only NFL games, he'd be good in either role. That he does both makes his work even more impressive.

He's always prepared, capably conveying his years of preparation for NFL Draft coverage in the form of player evaluation and explanations of what those on the field do best ... or not very well at all.

When San Diego Chargers quarterback Phillip Rivers threw an interception in the end zone at the end of the first half of Thursday night's game against the Kansas City Chiefs, Mayock did not mince words.

"Can't do that. Can't make that throw," Mayock said. "He threw one in the 10th row two snaps ago, why would you make that throw? Everything was bad about the decision, and then the throw. There's no way in the world you can make that throw."

In fairness, and he was fair to Rivers, Mayock cited the QB's overall work in the first half as "almost perfect" until the interception. Mayock rarely raises his voice, shares silliness or shouts. He's simply solid, setting a standard to which others should aspire.

There's not much better in terms of TV viewing than getting to watch Mayock work twice in a three-day span -- with a Thursday night game on the NFL Network and then a Notre Dame game on Saturday.
Posted by Steve Sampsell at 10:01 PM